BORKOVIĆ ON THE PODIUM AGAIN 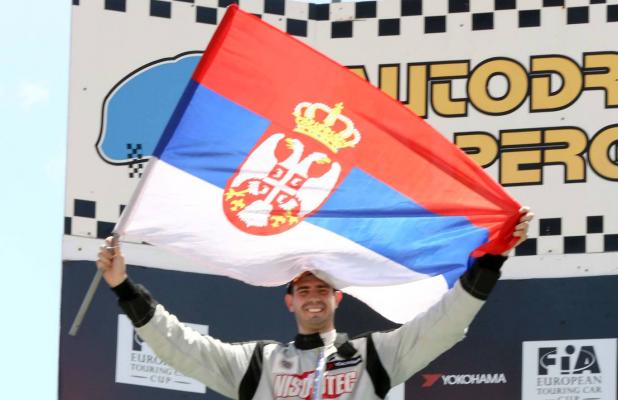 Dušan Borković and NIS Petrol Racing Team were brilliant once again. With the new car (Chevrolet Cruze S2000) that he first drove the day before the race, Borković achieved great success in Sicily in ETCC (European touring car cup)one of the most prestigious FIA championships. At the Pergusa circuit Borković was second in the first race and third in the second in the S2000 class, landing him at the third place in overall standings two races before the season finale which is the great and for some surprising success in the debut season of ETCC.
During the night NIS Petrol Racing Team members worked very hard setting all the parameters of the car and cleaning the radiator fixing the problem with engine heating from the day before. Already at the warm up you could tell it was Borković’s day. Duca had the best time and confidently started the race from the ninth position. Bravely and wisely he catched on his rivals and won the second place at the end of the race. He passed the finish line right behind Fulin and the results show that Borkovic achieved the best time in the first race.
According to the competition rules as second in the first race our champion started the second race from the 7 position. As in the first race Borković started hard and was improving his standing throughout laps. Borković couldn’t get Chevrolet’s maximum performance at the finish because his lost exhaust pipe in one of the contacts. And even then Dušan was right behind Fulin all the way, not wanting to risk to much he crossed the finish line third. The celebration started in NIS Petrol Racing Team quarters. Serbian, Croatian and Spanish experts who put great efforts to prepare the car to endure all the challenges in Pergusa were all hugging.
“I’m very happy. I want to thank all the guys who did great job preparing the car. Both races were very hard with a lot of dangerous contacts, but all ended well. I can’t believe it myself that yesterday was the first time I drove Chevrolet and practically without proper test I managed to get on the podium and win new points. I believe we can do even better on the last competition weekend in Czech Republic. We will do our best to defeat Fulin in Brno on his track and to finish the debut season on top. Next year we are going for the win in this prestigious European competition and then straight to WTCC (World touring car cup). I want to thank NIS and NIS Petrol, city of Panchevo, Ministry of sports and youth and everyone who watched and cheered for us. I felt great waving Serbian flag at the podium. We are going straight to new successes.” - Dušan Borković said at the end of winning ceremony.
Last two season races will be driven on October 6 at the race track in Brno (Czech Republic)
Official results and standings you can download from > www.fiaetcc.com web site.
Where to buy?
Actions and promos

Products according to the request of the buyer